“This guy had been deeply involved in terrorist acts against the people of Afghanistan, Nato and the government,” Collins said. “He was a top commander of Taliban operations in the south and now he’s no more.”

Osmani was also in charge of the Taliban’s finances and was involved in roadside bombs, suicide attacks and kidnappings, Collins said.

Collins said Osmani had been utilising both sides of the Afghan-Pakistan border, and that the US military had been tracking him for a while.

“When the time was right, and we thought we had a good chance of hitting him without causing any harm to civilians, we struck,” he said.

Although the US said Osmani was an associate of bin Laden, Omar and Afghan insurgent leader Gulbuddin Hekmatyar, Collins said he did not know the last time Osmani had contact with any of the three.

There was no immediate confirmation from Afghan officials, and a purported spokesman for the Taliban could not immediately be reached for comment. 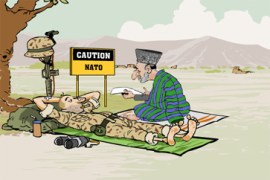