He quoted witnesses as saying that tanks and troops in Ethiopia are moving towards the area and that local people around Baidoa are fleeing.

Adow also said reflief agencies have cautioned there could be a very big crisis in view of the imminent fighting.

On Friday, Ethiopia said it was running out of patience and accused the Council of Islamic Courts of a range of hostile acts, in a statement issued by the foreign ministry in Addis Ababa on Friday.

From the Ethiopian capital, Al Jazeera’s Southern Africa correspondent Kalay Maistry said government officials do not wish to heighten tensions and are insisting that there is nothing new to say.

She said an Ethiopian military spokesman had confirmed that troops were on their way to Baidoa. But Meles Zenawi, the prime minister, has been cagey and reluctant to divulge specifics.

Ordinary Ethiopians are wary of their country getting sucked into a conflict, Maistry said, but their main concern is that “jihadis” in Somalia might try to carry out acts of terrorism in Ethiopia.

“They see their government’s actions as in keeping with the African Union and United Nations directives to support the [Baidoa-based] Somalian transitional government.”

The Council of Islamic Courts said they would send ground troops to attack on Saturday, instead of fighting from a distance with heavy weapons as they have been doing so far.

“Our troops have not started to attack. From tomorrow the attack will start,” said Ibrahim Shukri Abuu-Zeynab, an Islamic Courts spokesman.

Witnesses near the fighting on two fronts near the government’s encircled stronghold of Baidoa said they heard the rumble of armour before dawn.

“I was awakened this morning by heavy sounds of tanks. I woke up and saw seven Ethiopian tanks heading towards Daynunay,” Abdullahi Ali, a Baidoa resident, said.

Daynunay is the government’s forward military base about 20km southeast of Baidoa. Ethiopia has said it has military trainers there, but not combat troops.

The other front, Idaale, is 70km southwest of Baidoa, a southern agricultural trading post which is the only town the government controls.

The Islamic Courts also said Ethiopian soldiers were moving by air and ground towards Galkaayo, a strategic central Somali town held as a forward defence base by government-allied Puntland troops.

One government parliamentarian in Baidoa said he was concerned that opposition fighters would take the town.

“More well-armed Ethiopians are pouring here minute after minute and thousands of Islamic Courts fighters are heading here to force them and the government out,” he said on condition of anonymity.

Fighting along two front lines continued for a fourth day on Friday, with both sides claiming victory.

About 500 Ethiopian troops with eight tanks and 30 pickup trucks mounted with anti-aircraft guns were also headed for Bandiradley, an Islamic Courts stronghold in central Somalia, according to witnesses and Islamic Courts officials.

Ethiopian tanks counter-attacked Idale, which the Islamic Courts said they had captured on Thursday. Ethiopian prisoners were paraded in the town, residents said.

On Thursday, the leader of the Islamic Courts said Somalia was in a state of war and called on all Somalis to fight Ethiopian forces in the country.

The transitional federal government depends on Ethiopian troops for protection and military advice, making it impossible to differentiate government soldiers from Ethiopian forces.

The fighting threatens to expand into a regional war, sucking in Ethiopia and its bitter rival Eritrea. Eritrea is accused of supporting the Islamic Courts.

The UN has appealed for calm. It said fighting would prevent aid from reaching hundreds of thousands in dire need of help because of hunger and flooding.

Somalia has not had an effective government since 1991. 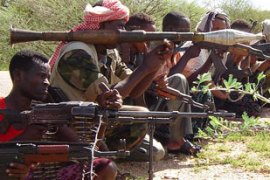 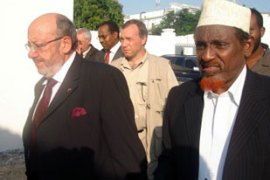 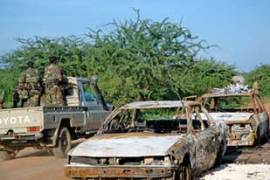