The shuttle brought home Williams’ predecessor aboard the space station, German astronaut Thomas Reiter, who felt the pull of gravity on Friday for the first time since July.

It was not until about an hour before the landing that Nasa decided where to bring the shuttle home. There were showers over Florida, and crosswinds at the usual back-up landing site, Edwards Air Force Base in California’s Mojave Desert.

Ultimately, Nasa gave the go-ahead for a Florida landing when it appeared the rain would not reach Cape Canaveral. The shuttle came in through scattered clouds.

Discovery’s crew accomplished the main goals of the mission, which began on December 9 with a launch from Florida.

The astronauts smoothly installed an $11 million, 2-ton truss segment on the space station’s backbone and put in a new electrical system so laboratories built by Europe and Japan can be added to the station in the future.

Nasa plans at least 13 more missions to complete the half-built, $100 billion space station before the shuttle fleet is retired in 2010. 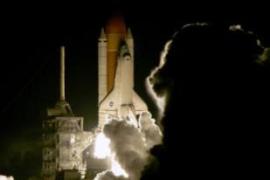 A mission to the international space station begins from the Kennedy Space Centre.