More than 7,000 security forces have been ordered onto the streets of the capital, Dhaka, to prevent violence, Dhaka Metropolitan Police said. Extra police will be deployed in more than 60 other cities and towns.
A 14-party alliance, led by Sheikh Hasina Wajed, the former prime minister, organised the strike despite efforts by the interim government to defuse a deadlock over the polls.
The protest has been supported by the parties of two former presidents, Hossain Mohammad Ershad and Badruddoza Chowdhury.
Deadline extended
On Wednesday, the election commission announced that candidates would have three more days – until Sunday – to file to participate in the January 22 election.
The alliance rejected the move. “The changes are not enough to create an atmosphere for free and fair elections,” said Abdul Jalil, a spokesman for the alliance, which is demanding a delay in the election date.
To meet an alliance demand, the country’s interim government said on Wednesday it would ask a controversial election official take a leave of absence.
Mahbubul Alam, a government spokesman, also said the election commission would be asked to correct a flawed voter list – another key opposition demand.
Hasina’s ultimatum
Hasina has threatened to oppose the elections unless the alliance’s demands are met.
She also has urged Iajuddin Ahmed, the president, to resign as the country’s interim leader, claiming he is controlled from behind the scenes by Khaleda Zia, the former prime minister.
Zia and Hasina are longtime adversaries, holding power alternatively since democracy was restored in 1991 after 16 years of autocratic rule.
Impoverished Bangladesh has been repeatedly paralysed over the past two months by protests demanding electoral reforms.
Demonstrations and clashes have left more than 30 dead and scores injured.
Source: News Agencies 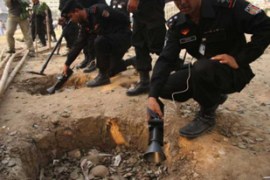 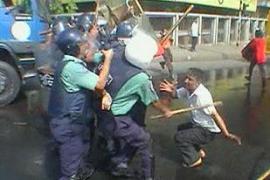 The opposition alliance says the president is biased and should step down. 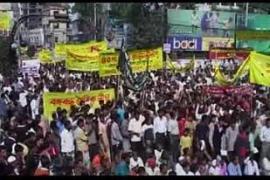 Unease grows over Iajuddin Ahmed’s move to call out troops in the run-up to elections.