He said: “The Iraqi police and Iraqi army can assume overall  responsibility for all law enforcement and security activities. This is a terrific success for Iraq, achieved through the policies of the Iraqi government.”

Soldiers showed off their armoured personnel carriers and Humvees, police paraded with ceremonial swords and ended the celebration with a display of horsemanship.

Iraqi commandos displayed their karate moves, and, in a traditional display of courage, ripped open a live rabbit with their teeth and bit the heads off frogs.

While the troops and police on display represented both national and local commands, the ceremony had a local, Shia flavour.

Pictures of Iraq’s four most senior Shia ayatollahs were paraded.

US-led forces will remain to provide support, but their commanders now believe day-to-day operations in Najaf can be handled by Iraqis, a small step closer to the end of the US mission in the country.

Brooks promised his Iraqi comrades: “We will be quite literally up the road.”

British and Italian forces have already passed control of two southern provinces to local governors, but Wednesday’s ceremony was the first of its kind in the more volatile US-controlled regions of central Iraq.

More provinces are expected to follow suit in the coming weeks.

Mowaffaq al-Rubaie, an Iraqi national security adviser, said in Najaf: “In a few days we shall see a transfer of security in the three provinces of Kurdistan.”

Two days after being sworn in as the new US defence secretary, Robert Gates arrived in Baghdad on Wednesday to see the war George Bush, the US president, has said for the first time America is not winning.

The former CIA director’s surprise visit follows a Pentagon report that said violence in Iraq was at an all-time high and as Bush decides a new strategy for the conflict.

In a turnaround from past assessments on the Iraq war, Bush told the Washington Post: “We’re not winning, we’re not losing.”

Gates, who replaced Donald Rumsfeld, said on Monday that failure in Iraq “would be a calamity that would haunt our nation, impair our credibility and endanger Americans for decades to come.

“All of us want to find a way to bring America’s sons and daughters home again. But, as the president has made clear, we simply cannot afford to fail in the Middle East.” 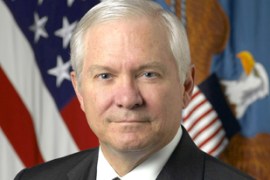 Forces are “stretched” and increase is needed to fight “terrorism”.

Bush vows not to be rushed on Iraq

“Massive” explosions have shaken the old quarter of Najaf as reports emerge that Shia leader Muqtada al-Sadr has ordered his militiamen to leave the holy shrines.