Isabekov did not say when the 75-seat chamber would start discussing the new team.
Many Western powers are concerned that Kyrgyzstan, which hosts US and Russian military bases, has been unstable since Kurmanbek Bakiyev, the current president, came to power in the “Tulip revolution” last year.
Reformists have complained that arguments between the pro-Bakiyev government of Felix Kulov, the prime minister, and parliament have blocked work on liberal reforms.
Protests
Last month thousands of opposition supporters took to the streets of Bishkek, the capital, accusing Bakiyev of slowing the pace of democratic reform.
The protests caused the adoption of a new constitution which cuts Bakiyev’s presidential powers and transfers the right of forming and electing a new cabinet to parliament.
Kulov and his government resigned on Tuesday in line with the constitution.
Tairbek Sarpashev, a deputy parliament speaker, said “He [Kulov] believes it is difficult to work with this parliament.
“He thinks it will be easier to work with a different parliament. Obviously he believes he will remain in office.”
According to the new constitution, parliament has a right to disband itself at any time if two-thirds of its deputies agree to do so.
Bakiyev can disband it and call elections only if the chamber fails three times to form a government, according to the new constitution.
Source: News Agencies 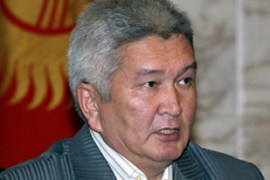 The Kyrgyz cabinet resigns prompted by disagreements with parliament.

The Kyrgyz president has signed a new constitution that limits his power in a bid to defuse the present political crisis.

Kyrgyzstan’s government has struck a deal with the country’s opposition to defuse a constitutional standoff that flared into clashes between rival protesters.

The Kyrgyz president has threatened to dissolve parliament if no political solution is found to the opposition’s demands to rewrite the Central Asian state’s constitution.