The Iraq Study Group is an advisory panel of Democrats and Republicans examining alternatives to US policy towards Iraq.

Led by James Baker, the former US secretary of state, the group’s recommendations are likely to carry significant weight with the White House, and with the public.

The United States Institute of Peace said in a press release that the panel will present its report to the US president and Congress on December 6.

The event would be followed by a news conference.
Citing people familiar with the panel’s deliberations, the Times said the Iraq Study Group will recommend that Bush make it clear that he would start the troop withdrawal “relatively soon”, indicating sometime next year.
That recommendation would be a compromise between calls from some Democrats for a timetable to withdraw the nearly 140,000 US forces in Iraq and Bush’s insistence that forces should remain until the mission to stabilise Iraq was completed.
The Times said the report did not state whether the 15 combat brigades making up most of the US fighting forces in Iraq would be brought home or pulled back to bases in Iraq or neighbouring countries.
But the pullback of the 15 combat brigades could still leave more than 70,000 American trainers, logistics experts and members of a rapid reaction force in Iraq, the Times said.
Consensus
On Tuesday, the group’s co-chairman, Lee Hamilton, told the liberal Center for American Progress: “We reached a consensus.”
But he refused to provide details saying the results would be revealed at the December 6 news conference.

George Bush’s fellow Republicans lost control of the US Congress earlier this month largely because of public dissatisfaction over the war, in which 2,885 US forces have died since the March 2003 US-led invasion that toppled Saddam Hussein.

Impetus
Many in Washington believe the group’s report may provide the impetus for a change in policy or, at the very least, recommendations on how to move forward that may attract support from Democrats and Republicans.
The panel of five Republicans and five Democrats has been studying critical questions such as whether the US should begin to withdraw some of its nearly 140,000 troops from Iraq amid accelerating sectarian violence.
One source close to the panel’s deliberations said, “There were very intense debates and they came up with some compromises to get everybody on board.”
Source : News Agencies 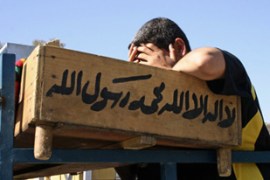