On November 21, Iraq and Syria announced the restoration of diplomatic ties, 26 years after Saddam Hussein, the then Iraqi president, severed relations in protest at Syria’s support for Iran in its war against Iraq.
The move came at the end of a visit to Baghdad by Walid Moallem, the Syrian foreign minister, the first by a foreign minister from Damascus since the 2003 overthrow of Saddam in a US-led invasion.
Recommendations
In other news, Naseer al-Ani of the Sunni Iraqi Islamic Party and spokesperson for Iraq’s reconciliation conference said the meeting has come up with more than 30 recommendations, among them were the formation of some committees.
These recommendations will be semi-abiding if they were to be implemented, as he put it. The constitutional committee recommended reviewing the constitution, particularly the articles on federalism and banning of “Saddamist Baath” and its members from employment.
The army committee recommended that the formation an Iraqi army should be based on patriotic and professional bases, making use of the former Iraqi army and calling for compulsory military service.
The constitution power committee proposed setting a timetable for foreign forces’ pullout from Iraq and urgently handing over security duties to Iraqis.
It suggested asking the Iraqi parliament to pass a law nullifying the so-called Bremer laws – laws passed on the watch L Paul Bremer, the US pro-consul in Iraq just after the invasion – that contradict the national interest.
Source: Al Jazeera, News Agencies 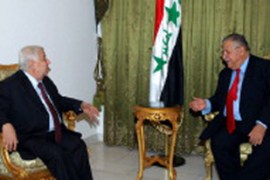