The mass abduction on Saturday of 30 people from Baghdad’s main office, 19 of whom were Red Crescent employees, is a blow to the aid organisation, which is the only group currently operating in all of Iraq’s 18 provinces.

In a statement on Monday, Maazen Abdullah said that at least 17 men who were seized in Sunday’s raid  by gunmen dressed in police uniforms have been released, including three guards from a nearby Dutch embassy and 10 Red Crescent guards and drivers.

Sectarian fighting between Sunnis and Shias has raged this year in Baghdad, forcing many people to flee their homes.

Many have found themselves living with families in safer neighbourhoods and a small number are living in camps in the city.

The Iraqi Red Crescent, which has 1,000 staff and 200,000 volunteers, is currently aiding thousands of families in Baghdad alone to ensure that their basic needs are met.

Asked how the suspension would affect those dependent on help, Doumani said: “There are not so many people living in tents in Baghdad, they are staying with families, it is not a life-saving aid operation, people will still be able to access their needs.”

Abdullah told Al Jazeera that the IRC was working hard to ensure the safe return of the employees and stressed the difficulty of running operations in Baghdad’s current environment.

He said: “Our main aim is the safe return of our employees, not to find who is responsible.

“Violence is very often in Iraq, and it is difficult to work in such an environment. The people who were taken work at our main branch in Baghdad which helps coordinate 40 branches across the city. They have an important role because of their experience in operations.”

“We had an incident only two months ago where an employee was kidnapped and killed. It is not an isolated incident. But we have never seen anything on this scale before,” Abdullah said.

In other developments, plain-clothes Americans took a former Iraqi electricity minister – a dual US-Iraqi citizen – from Iraqi police custody on Sunday where he was awaiting trial on corruption charges, Iraqi officials said on Monday.

The officials described “US forces” and men in “American cars” removing him from his cell in a police station in the heavily fortified Green Zone, which houses the Iraqi government and the US and British embassies.

Lou Fintor, a US embassy spokesman, said: “We are aware of this report and looking into it.” He declined further comment.

Ayham al-Samarraie, who served in the post-war interim government of prime minister Iyad Allawi, was found guilty of corruption in a separate case in October and jailed for two years.

A judge close to the case, speaking on condition of anonymity, said Samarraie had won that case on appeal but the trial court had ordered that he remain in custody to face trial in up to 12 other cases.

Samarraie’s whereabouts on Monday were not known, but the judge said the court held both his American and Iraqi passports.

“We don’t know if he is still in the country or abroad,” Shaboot said. The commission, which says it is investigating nine cases against Samarraie of misuse of public money, was told about the incident only 12 hours later, he said.

Later on Monday, a car bomb at the entrance of a wholesale vegetable market killed five people and wounded 19 in a Sunni area in the southern Saidiya district of Baghdad, police said.
Source: Al Jazeera, News Agencies 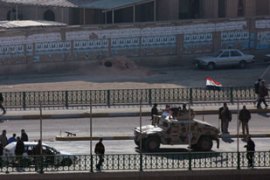 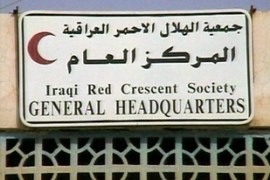 Dozens of people abducted from a Red Crescent office as British PM arrives in Iraq.