Othman Bizanti, the health workers defence lawyer, said that an appeal would be filed before Libya’s supreme court within the legal time-limit of 60 days.

Bulgaria’s parliamentary speaker has urged Libya not to carry out the death sentences.

“We categorically and decisively reject the confirmation of the death sentences… [and] express our deepest conviction that such verdicts cannot and must not be carried out,” Georgy Pirinski said.

While the country’s foreign ministry urged Libya’s leadership to intervene.

“The prolonging of this court case for an eighth year now is a strong enough argument for the Libyan institutions and the leadership of the country to get involved,” a statement said.

Earlier in the year, a British scientific journal published a report saying the particular strain of the HIV virus which infected the children was introduced to the hospital before the six began working there.

Many believe the infections were caused by bad hygiene at the hospital.
Before the accusations there had been no confirmed cases of the virus in Libya.

“We need scientific evidence. It is a medical issue, not only a judicial one,” Francois Cantier of Lawyers Without Borders, an international legal observer, said at the court after the verdict.

Thrown out of court
In 1999, six Bulgarian nurses and two doctors, one Bulgarian and one Palestinian, were detained on charges of deliberately infecting children with the HIV virus.

The health workers pleaded not guilty and in 2002 the case was thrown out of court, but a second prosecution was started and three of the defendants withdrew their confessions, saying they had been tortured and forced to write them.

In 2004 the five nurses and Palestinian doctor were sentenced to death , but the ruling was quashed by the Libyan supreme court.
The Bulgarian doctor was charged with currency smuggling and sentenced to four years in prison.
In 2006, an appeal court ordered a retrial of the six remaining health workers.
The EU, which Bulgaria is to join next year, had called for the release of the six.

Franco Frattini, the European Union justice and security commissioner, said he was disappointed with the verdict.

“I am shocked by this kind of decision … I strongly hope that somehow the Libyan authorities will rethink this decision. I wonder whether there is a concrete possibility of annulling this decision taken by the court … otherwise it is an obstacle for our co-operation.”
Source: News Agencies 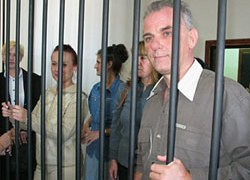