A local rights group, The Movement of Liberties and Democracy, described al-Jamri as a person “who struggled for real constitutional citizenship where people live in peace without distinction between Sunnis and Shia.”

His demands in the early 1990s called for a restoration of the elected parliament which was scrapped in 1975 by the government of the Sunni-ruled Gulf state. 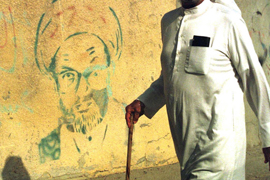 He also demanded a return of political exiles and a fairer distribution of economic resources.

At least 38 people died during the anti-government unrest between 1994 and 1999, which saw Jamri jailed twice, from April to September 1995 and again in January 1996, when he was sentenced to 15 years in prison and fined the equivalent of $40m.

He was released after King Hamad bin Isa Al Khalifa ascended the throne in 1999, but remained under house arrest until early 2001.

Earlier this month Bahrain named a Shia, Jawad bin Salem al-Oraied, as a deputy prime minister for the first time.