Luis Fabiano opened the scoring from the penalty spot for Sevilla after 10 minutes, after a controversial foul by Juan Merino on Antonio Puerta.

“Perhaps the penalty wasn’t obvious,” Sevilla coach Juande Ramos conceded. “But in the end it didn’t matter as we dominated and were far better.”

Recreativo evened things up shortly afterwards with a header by Jesus Vazquez but the visitors were determined not to squander their chance to lead the league.

Frederic Kanoute put Sevilla back in front after 34 minutes, the Malian striker’s 12th goal of the season coming from close range after Recreativo keeper Javier Lopez Vallejo could only parry away a Renato header.

Jesus Navas then added Sevilla’s third just after the break.

Sevilla shut up shop after defender Aitor Ocio received his second yellow card on 64 minutes, ensuring that they took all three points with them on the short 60-kilometre trip back home.

After a tepid first half, sparks started to fly after the break in the match between Espanyol and Real Madrid.

Ruud van Nistelrooy got his ninth goal of the season after 51 minutes, finishing off an inch-perfect pass from Jose Maria ‘Guti’ Gutierrez for the only goal of the game.

“I’m very satisfied because because we had a very good game. I liked everything I saw from my team. We never panicked, we dominated with quality and we were worthy winners,” Fabio Capello, the Real madrid coach, said.

Two minutes after the goal, Real were reduced to 10 men when Italy’s World Cup winning captain Fabio Cannavaro got his marching orders for a second yellow card, his first sending off since being signed by Madrid in the summer.

“It was an unfair sending off because the ball hit him in the face and didn’t touch his hand, like the referee thought,” Capello said.

Capello immediately replaced Robinho with central defender Alvaro Mejia and Real hung on for the win.

The Spanish capital’s two other team’s met on Sunday with Atletico Madrid winning 1-0 over Getafe.

Atletico’s Portuguese midfielder Maniche headed the only goal of the game mid-way through the first half after a looping pass from out on the right flank by Fernando Torres.

Osasuna continued their recent revival with a 4-1 win away at out of sorts Villarreal.

Cameroon striker Pierre Webo put the visitors in front when he nodded home, Iran midfielder Javad Nekounam doubled their lead before the break with another fine header and midfielder David Lopez made it 3-0 from the penalty spot.

Cani pulled one back for Villarreal with a great strike on the hour, but midfielder Juanfran wrapped up an emphatic win when he stole in at the near post 20 minutes from time giving Osasuna their fourth consecutive win.

At the bottom of the table, Real Sociedad came from behind twice to beat fellow strugglers Gimnastic Tarragona 3-2 for their first league win in eight months.

Sociedad have been stuck on the bottom of the Spanish first division for most of this season and had not won in 14 games ahead of their victory on Sunday.

“Not only does it close the gap on those teams immediately above the relegation zone, it’ll give more confidence to the team and that can take us forward,” said Sociedad coach Miguel Angel Lotina.

Gimnastic’s Miguel Angel Llera got his first goal in the top  flight of Spanish football with a header from a David Cuellar free kick after 17 minutes.

Sociedad equalised two minutes after the break as the ball bounced off the back of luckless Gimnastic defender Mingo Pladevall and into his own goal.

Diego Rivas then gave Sociedad the lead for the first time and  the Basques hung on to win and swap places with Gimnastic at the foot of the table.
Source: News Agencies 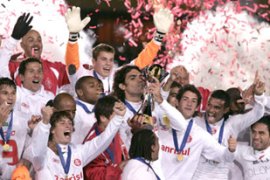