‘A fascist country’
Alexei Yablokov, an academic, said: “When journalists are killed and the authorities do not find their killers it means that the authorities do not want people to know the truth.
“Such a country is going nowhere, has no future and is going toward fascism. That is why I am here. I do not want my Russia to become a fascist country.”
Some of the dead journalists being remembered were killed in car accidents, but most were murdered.
Politkovskaya, a journalist known for her opposition to Kremlin policies on Chechnya, was killed on October 7 outside her central Moscow apartment.
One placard read: “Anna Politkovskaya – the country’s conscience.”
Ernst Chorny, a human rights activist, said: “Putin is personally responsible for the complete chaos in which hundreds of journalists are killed.”
Chorny was holding a picture of Klebnikov, the editor of the Russian edition of Forbes, who was shot dead in central Moscow in July, 2004. His killers have yet to be brought to justice.
The journalists were banned from marching to their rallying point and the relatively heavy policing appeared to reflect the authorities’ concern that it could turn into an anti-Kremlin demonstration.
Pro-Kremlin rally
On Saturday, police in riot gear turned out in force to hem in a small rally of opposition demonstrators.
This contrasted with a demonstration on Sunday organised by the pro-Kremlin youth group, Nashi, to congratulate veterans of the World War II defence of Moscow with presents and flowers.
About 50,000 Nashi activists dressed up as Father Christmas and were allowed to move around unhindered.
Gregory Yavlinsky, leader of the liberal Yabloko party, told Reuters he was amazed by the police presence at the journalists’ rally.
He said: “If there is no independent judicial system, if the whole law enforcement system has been commercialised then how can the murders be solved?
“They cannot be solved.”
Source: News Agencies 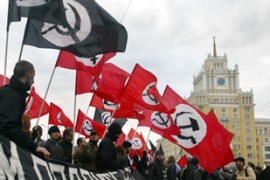 Vladimir Putin, the Russian president, has been criticised for saying that the murdered journalist Anna Politkovskaya had exerted little influence on Russian political life.

Two human rights watchdogs have called on the Russian president to denounce the murder of journalist Anna Politkovskaya.