Ibrahim Abu Najja, head of a high-level committee that includes all the groups, told AFP: “There is an agreement between all armed Palestinian groups for a ceasefire and to end the violence.”
The development was confirmed by Ismail Radwan, Hamas spokesman, who told AFP that the ceasefire pact stipulates that “armed men must stop circulating on the streets”.
Just before the news of the truce broke, a Fatah spokesman said a colonel in the Palestinian national security service belonging to Fatah was kidnapped and killed on Sunday in the Gaza Strip by Hamas fighters.
Adnan Rhami, 40, was abducted with two bodyguards while driving in the Jabalya camp, after which the masked kidnappers shot him and dumped his body near a hospital, the spokesman said.

A Palestinian security source said two mortar bombs landed less than 100 metres from Abbas’s office injuring five of his presidential guards.
Forces loyal to Hamas and Fatah fought street and rooftop gun battles across Gaza throughout the day.
Heavy fighting
Residents said it was the heaviest bout of internal fighting in living memory.
Armed men also opened fire at a Fatah rally on Sunday, wounding at least seven people, Palestinian security officials said.
Tens of thousands of people were marching in the northern Gaza Strip in support of Abbas.

“We came under fire without any provocation,” Amina al-Ghesari, a witness told the Associated Press news agency.

“There were gunmen, we think they were from Hamas, on one of the rooftops. People started running for cover. We were in a peaceful demonstration, and we were on our way home when the shots were fired.”
Despite the violence, Abbas has indicated he is determined to push ahead with his plan to dissolve the government and hold early elections.
Ismail Haniya, the Palestinian prime minister, said Hamas would boycott the polls and accused the president of trying to topple the government illegally.
Haniya told a cabinet meeting that the call for early elections was “unconstitutional” and could create further disorder in the Palestinian Territories.
“The government rejects the call for legislative elections as they are unconstitutional and create confusion,” he said. 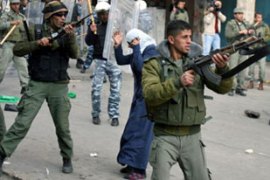