Reid said: “The American people will not allow this war to go on as it has. It simply is a war that will not be won militarily. It can only be won politically.”
Powell comments
However, Colin Powell, the former secretary of state, expressed doubts any troop surge would be effective, saying US forces are already over overextended.
Arguing that US troops should not act as policemen, he said: “The American army isn’t large enough to secure Baghdad.”
Powell described the active US army as “about broken”, with a shortage of equipment, officers going on repetitive tours, and gaps in military coverage elsewhere in the world.
He said: “The current active army is not large enough and the marine corps is not large enough for the kinds of missions they’re being asked to perform.”
Powell said any victory must increasingly become the responsibility of the Iraqi leadership.
He said: “If they can’t pull it off, if they can’t demonstrate the political will and means to go after the militias, to create a military force that is answerable and confident in the government, and to root out the corruption that exists in the police forces, if they are unable to do that, the United States is not going to be able to do it for them.”
Sunni objections In contrast to Powell’s remarks, Iraq’s Sunni vice president has argued that more American soldiers in Baghdad are precisely what is needed to quell sectarian violence.
Tariq al-Hashemi, who met with Bush in Washington last week, said: “Who is going to replace the American troops? … Iraqi troops, across the board, they are insufficient, incompetent, and many of them [are] corrupted.”
There are about 140,000 US troops in Iraq and about 5,000 advisers. Combat troops make up less than half of US forces in Iraq.
Democratic opposition
At least three other Democrats did not support Reid’s position on the additional soldiers.
Jack Reed, senator for Rhode Island, said that if it were a short-term increase, “won’t our adversaries simply adjust their tactics, wait us out and wait until we reduce again? So I think you’d have to ask very serious questions about the utility of this.”
Edward Kennedy, senator for Massachusetts, said: “I respect Harry Reid on it, but that’s not where I am.”
Kennedy, like Reed a member of the Senate Armed Services Committee, said there would be widespread opposition by members of his committee if Bush proposed a troop increase.
Joseph Biden, senator for Delaware and the incoming chairman of the senate Foreign Relations Committee, said any proposal to send more troops should only follow a political solution that will end civil unrest.
He said: “The president and others who support the surge have it exactly backwards.” 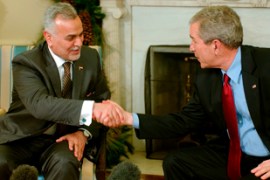 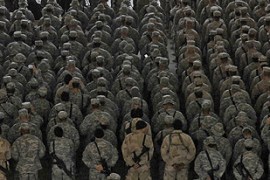 Survey seen by Al Jazeera shows 90 per cent think country is worse off after war.

Bush vows not to be rushed on Iraq