Manchester United had not lost at Upton Park since the start of the Premier League in 1992 while newly-installed manager Alan Curbishley had never been in charge of a winning team against them in 15 attempts.

Both those runs ended on Sunday as the Hammers finished a turbulent week on a high.

After losing five of their previous six games to slip to third from bottom in the league they sacked manager Alan Pardew on Monday and appointed the former Charlton Athletic boss and West Ham midfielder two days later.

West Ham had the best chance of the first half when Bobby Zamora broke free in the 32nd minute but shot straight at Edwin Van der Sar, although they needed several good saves by goalkeeper Robert Green to keep a creative United at bay.

The goal was created by a combination of substitute Teddy Sheringham’s guile – a pass threaded through Nemanja Vidic’s legs – and the persistence of Marlon Harewood, who battled past Rio Ferdinand and squared the ball.

Reo-Coker, who has been very much at the centre of West Ham’s recent troubles with rumours of a transfer request, then burst forward to slide the ball home.

“It has been such a stressful week, not just personally but for the squad,” Reo-Coker told Sky Sports.

“It has been a whirlwind, so much has gone on, such a quick change, but we had to make sure we were focused today.”

United boss Alex Ferguson bemoaned the timing of his team’s visit. “We played really well, we didn’t deserve to lose but I think we came here at a time of tremendous upsurge in energy, enthusiasm and optimism,” he said.

“If they played like that every week they wouldn’t be in that position but that’s what happens when a new manager comes in.”

Earlier on Sunday, Everton took a deserved lead against Chelsea at Goodison Park in the 38th minute with a Mikel Arteta penalty.

Chelsea equalised four minutes into the second half with a Michael Ballack free kick that crept in off a post and goalkeeper Tim Howard’s back.

Everton then retook the lead in the 64th minute with a Joseph Yobo header before Chelsea levelled in the 81st with a fiercely struck 25-metre shot by Frank Lampard.
Three minutes from time, after hitting a post, Drogba’s 35-metre looping shot somehow got through Howard’s flailing arms to win it.

“The players had incredible character, they believed until the last moment,” Chelsea manager Jose Mourinho said.

Tottenham Hotspur secured their first away win of the season beating Manchester City, who were previously undefeated at home, 2-1.

Spurs moved up to seventh in the league. 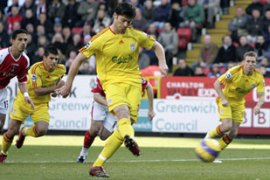