Authorities have not recovered Wali’s body, he said. Nato has said it was not aware of Wali’s reported killing. Several Taliban sources in Kandahar said 13 fighters died in the attack.
The Taliban are mostly active in southern and eastern Afghanistan close to the border with Pakistan which they reportedly use as a haven.
Nearly 4,000 people have died in fighting this year, the bloodiest period since US-led forces overthrew the Taliban in 2001.
Suicide bombing
On Sunday, a suicide bomber rammed his car into a convoy of foreign troops in the southeastern province of Khost, killing a local civilian and wounding three others, police said.
There were no casualties among the soldiers. Romanians stay In another development, Romania has said that next year it will maintain the same level of almost 2,000 troops deployed in Afghanistan, Iraq and other military theatres.
Sorin Frunzaverde, the country’s defence minister, said: “Today we have 1,950 soldiers in different international missions and we will maintain this presence in 2007.”
The one decrease will be that of a 200-man detachment whose mission to ensure security at Afghanistan’s Kandahar airport ends in early April.
A total 850 Romanian troops are currently deployed in Afghanistan. A further 605 are in Iraq, where Bucharest, a staunch US ally, has said they will remain until the Iraqi authorities ask for their withdrawal.
Source : News Agencies 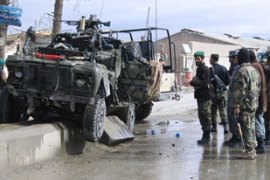 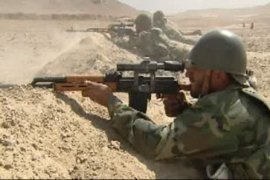