The figures involved sum up the modest nature of the exercise in the federation, the last of the Gulf Arab monarchies to introduce elections.

Only one polling station was open in each emirate, because only 6,689 people will be able to vote in the whole country, including 1,189 women.

Electoral colleges will pick 20 of the 40 members of the Federal National Council (FNC), which can debate bills submitted by the government but cannot propose or pass legislation.

The remaining members will continue to be appointed by the rulers of the emirates, whose nationals make up barely one-fifth of the estimated 4.1 million population.

Only members of the electoral colleges are allowed to run for the FNC, which sits for two years. There are a total of 439 candidates, including 65 women.

Abu Dhabi is the largest emirate. Its four seats will be contested by 99 candidates, including 14 women. In Fujairah, 35 candidates, with just one woman among them, will be vying for two seats.

The government insists that the polls are just the start of a gradual process that will eventually enable all Emiratis to elect half the members of an expanded council that will also enjoy greater powers.

Anwar Mohammed Gargash, a minister of state for FNC affairs who also heads the National Election Committee, said: “It’s not perfect, but it’s a first.” 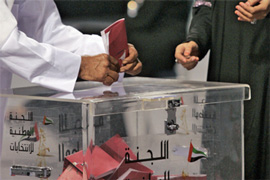 He was non-committal on the timeframe for future steps, attributing his caution to a troubled environment.

“It’s not a very stable place. If you make a mistake in the region, it’s critical,” he said.

In a Middle East buffeted by crises, the UAE stands out as stable and prosperous.

But while the UAE is ahead with economic and social modernisation, it is the last Gulf state to make democratic reforms. Among others, Saudi Arabia preceded it by holding male-only municipal elections last year.

Gargash said the government was not talking about democracy, merely about broadening popular participation.

“You cannot talk about democracy when you do not have political parties,” he said, adding there was no question of legalising parties, which remain banned in all the Gulf Arab states.

“We’re not trying to be another British parliament.”

Four seats are also up for grabs in Dubai and three in Ras al-Khaimah. Voting in those emirates will take place on Monday.

The elections will wind up on Wednesday in Sharjah, choosing three council members, and Ajman and Umm al-Qaiwain, with two seats each.