“There is no space for the king in the interim statute.”

The Maoists were determined to strip Gyanendra of his title and name a temporary replacement, such as Koirala. Koirala, in his 80s, is the respected architect of last month’s peace deal that ended 10 years of civil war in Nepal.

The conflict between the government and Maoist fighters killed at least 12,500 people in the impoverished Himalayan nation.

The draft constitution was approved after three days of intense negotiations between the two parties.

Nepal’s assembly will prepare a permanent constitution and decide the future of the monarch. Gyanendra, who had been increasing his powers, lost most of them, including control of the army, when he was forced to restore democracy in April following weeks of street protests.

Lila Mani Pokharel of People’s Front-Nepal, a smaller member of the ruling coalition, said: “The king will be there until the elections. But his role is limited to eat food and wait for the constituent assembly decision about his fate.”

The Maoists, who have agreed to confine their fighters to camps and lock weapons in containers monitored by the United Nations, were upbeat.

“Now there is a guarantee that elections for the constituent assembly will be held on the basis of this constitution,” Krishna Bahadur Mahara, the chief Maoist negotiator, said.

The assembly had long been a Maoist demand to end their anti-monarchy conflict, which began in 1996 and which has also wrecked Nepal‘s aid- and tourism-dependent economy and displaced more than 200,000 people.

“It [the draft constitution] will be proclaimed after managing the arms and armies in seven to 10 days,” Mahara said, referring to an earlier agreement to mandate the UN to monitor their weapons.

The UN says up to 35 monitors are expected to begin work this month, but the full monitoring mission will take more time. It has not given any specific timeframe. 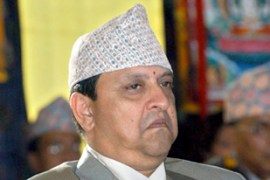 King Gyanendra is the first monarch in the country’s history to pay tax.