“I just hope this crisis passes without incident, and that those responsible are brought to justice.

“I am really afraid that this might escalate into something else entirely. In the face of all the weapons on the streets now, there is no more room for optimism.”

Sourani said he was certain that Mahmoud Abbas, the Palestinian president, would dismiss the Hamas government in the speech he is scheduled to give on Saturday, “but now”, he says, “I am not so sure.”

His uncle, Mustafa, said: “Just when I thought it couldn’t get any worse … it’s becomes worse. Much, much worse. And for the first time in as long as I can remember, I’m really afraid about what might happen next.”

Armed, masked members of Hamas’s executive security force cautiously patrolled the city’s streets throughout Friday, hours after shots were fired at Haniya’s convoy, killing his bodyguard and injuring his adviser and his son.

Hisham Nasir, a fruit vendor in Gaza’s Sabra neighbourhood, is equally disillusioned, but for different reasons. He expressed his disgust with internal strife, and his despair at finding a way out.

“I’m sick of this. We may as well turn into Iraq and get it over with. It’s all just going to hell. There’s no work, no income, and now, no security. Neither the government nor the presidency can do a thing about it,” Nasir said.

He said: “Initially, I was fearful of a Fatah backlash. But Haniya’s talk was very positive and reassuring. Haniya kept his cool and I think that resonated well with his supporters.

“He didn’t issue any personal attacks against anyone, and I think by so doing demonstrated his level-headedness and moderation and hope for a unity government after all.”

“I’m sick of this. We may as well turn into Iraq and get it over with”

Allawi says, in the end, he holds President Abbas responsible “for everything”, and accuses Fatah of exploiting the death of the three children last week for political ends.

“Fatah has tried to buy the street with the death of the three children. They’ve exploited it to the maximum. It was very obviously an attack planned to create further discord in the Palestinian street.”

Abbas’s Fatah has set up protest tents after the gunning down of the three young schoolchildren of a senior Fatah intelligence officer by unknown assailants last week.

Banners hanging alongside the tents called for the government to resign, reading: “Let the government of schisms and upheaval and impoverishment depart.”

Allawi said: “[Abbas] is the basis of all the chaos on the streets… He is like a broken record. He keeps repeating himself and no one is particularly looking forward to what he has to say.”

In support of Hamas

Ruayfa Kahlout, 54, stood amid throngs of female supporters of Hamas, raising their trademark green flags in a counter-demonstration.

“We are behind Abu al-Abed [Haniya] to the end, and we are here to show our support for him. Incidents like [the killing of the children] can only be committed by someone who does not know God.

“They ask: Where is the prime minister? But we ask: Where is the president? These are all acts carried out to create division in the Palestinian street and the young Fatah supporters are spurred on by provocative Fatah-controlled radio station and TV broadcasts.

“They are shooting into the air like lunatics, endangering people’s lives, and for what?”

Mkhaimar Abusada, a professor at the al-Azhar university, warns the internal political situation threatens to boil over at any moment if serious measures to “end or contain” it are not taken. 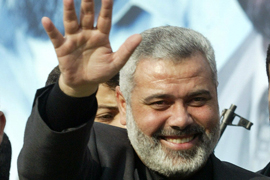 Abusada said that Haniya’s speech and the attempt on his life have increased his popularity and elevated his status among the Palestinian public to something “more than just a prime minister”.

“I believe the popular reception he received indicated that he meant much more to [his supporters] than simply the prime minister of the Palestinian government. It seems he has been promoted to the position of being the Palestinian leader in their eyes”.

“It put an end to the isolation of the Hamas-led government in the Arab and Muslim worlds, and, of course, he was very much successful in getting a lot of money for the Palestinians.”

Rumours have spread that Abbas, in his speech on Saturday, will call for dismissal of the current government and for early elections. Abusada, however, thinks not.

“I wouldn’t expect that the Palestinian president will take any bold or serious measures tomorrow. I think he might cancel his speech, and even if he doesn’t, he will not do anything more than explaining what has been going on over the past nine months.

“I really doubt that he will take any major steps that will pour fuel on the fire. It sounds to me that with the situation and tensions on the ground, we have no other choice except dialogue and to sit down together and get out from this crisis with a political settlement.

“All other options would be catastrophic.”

Tensions escalate in Gaza as Hamas accuses a Fatah leader of trying to kill the prime minister.