With Johnson, Democrats, who took control of the congress from Republicans in last month’s elections, would control the senate 51-49 when the 110th congress convenes on January 4.

But in the event of him being replaced, South Dakota law says the state governor, Michael Rounds, who is a Republican, would name someone to finish the final two years of his six-year term. An election for a successor would be held in November 2008.

If Rounds named a Republican, that would put the Senate at 50-50, with Dick Cheney, the vice-president, breaking any tie and putting Republicans in charge.

The only way there would be a vacancy to fill is if Johnson died or resigned. Even if incapacitated, he could remain in office, according to the senate historian’s office. 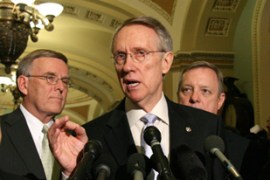 Democrats have wrested control of the Senate from Republicans with an upset victory in Virginia, giving the party complete domination of Capitol Hill for the first time since 1994.