In a speech after his oath of office, Ban outlined his vision for the international organisation.

“By strengthening the three pillars of our United Nations – security, development and human rights – we can build a more peaceful, more prosperous and more just world for succeeding generations,” Ban told ambassadors from UN member states.

“As we pursue our collective endeavor to reach that goal, my first priority will be to restore trust. I will seek to act as a harmoniser and bridge-builder.”

Ban said that world governments required a “dynamic and courageous” UN, and not one that was “passive and fearful”.

In delivering the oath, Ban swore “not to seek or accept instructions in regard to the performance of my duties from any government or other authority external to the organisation”.

Ban will start his five-year term with an agenda that includes issues such as nuclear proliferation, international terrorism and internal reform.

Asked at a news conference about Mahmoud Ahmadinejad, the Iranian president, and the recent two-day Holocaust conference in Iran, Ban said: “Denying historical facts especially on such an important subject as the Holocaust is just not acceptable.

“Nor is it acceptable to call for the elimination of states or people. I would like to see this fundamental principle respected in both rhetoric and practice by all members of the international community.” 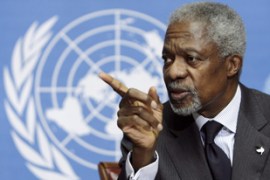 Annan to US: Stay fully engaged

UN chief asks US to respect multilateralism and human rights in farewell speech.