In a brief statement to the Australian Stock Exchange on Wednesday Qantas said it had received a non-binding conditional proposal made by the consortium to aquire 100 per cent ownership of the airline.

The offer price of A$4.33 per share was five per cent above Tuesday’s closing price.
The bidding team, which calls itself Airline Partners Australia, includes Australia’s Allco Equity Partners with a 34 per cent stake, Allco Finance Group with 11 per cent, Macquarie with less than 15 per cent.
In addition Canadian investment firm Onex Corp. and US-based private equity firm Texas Pacific held a combined stake of less than 40 per cent.
John Howard, Australia’s prime minister, had earlier said the government will not change foreign investment laws to block the bid.
While he said he shared domestic concerns about iconic Australian companies being placed in foreign hands, he said Australia would abide by open market practices.
In 1995, when Qantas was privatised, the government set rules capping single stake ownership of the airline at 25 per cent, total foreign ownership at 49 per cent, and total ownership by foreign airlines at 35 per cent.
Source : News Agencies 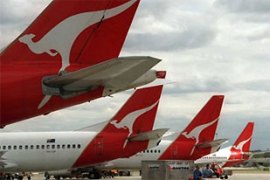 Shares in Australian carrier hit a record high on reports of an $8bn takeover bid.