“The chamber finds you guilty of genocide and extermination and sentences you to a single term of 15 years in prison,” Andresia Vaz, the chief judge, said, reading the verdict of the three-member panel.

Seromba will only serve about 11 years because he has already spent four years in jail while on trial.

The former priest, the 27th person to be convicted by the court, had denied the charges claiming he was a simple parish priest and powerless  to stop the killing.

Thousands of Rwandans have turned away from Catholicism after learning of the complicity of church officials in the genocide.

Priests, nuns and parishioners were all implicated in the killings, and some churches became sites of notorious massacres.

Last month, the tribunal sentenced a Catholic nun to 30 years in jail for helping militias kill hundreds of people hiding in a hospital.
In 2001, two Catholic nuns were convicted by a Belgian court of aiding and abetting the murders.

Rwanda’s genocide began hours after a plane carrying President Juvenal Habyarimana was shot down as it approached the capital, Kigali, in April 1994.

The slaughter ended after 100 days when forces led by Paul Kagame, the current president, forced the Hutu government out of power.

About 63,000 genocide suspects are detained in Rwanda, and justice authorities say that at least 761,000 people should stand trial for their role in the slaughter.

The suspects represent 9.2 per cent of Rwanda’s estimated 8.2 million people.

The UN tribunal in Tanzania is only trying those accused of masterminding the genocide.
Source : News Agencies 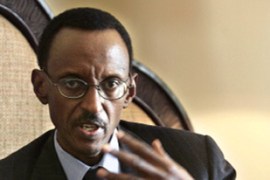 A Catholic nun has been sentenced to 30 years in prison for helping Hutu fighters kill hundreds of Tutsi during Rwanda’s 1994 genocide, an official said.

Rwanda minister not guilty of genocide

A former Rwandan government minister has been acquitted of genocide charges by a United Nations tribunal.

‘No amnesty’ for Rwandan killers

Rwanda’s president has said that Hutu extremists accused of masterminding the Rwandan genocide and then fleeing to Congo cannot expect an amnesty.