The report said calls for a referendum to determine the region’s status were “wholly out of step with the needs of the local people and thus damaging to their interersts”.

Pakistan has for decades demanded a referendum in Kashmir, in line with UN resolutions of the late 1940s and early 1950s, although Pervez Musharraf, the Pakistani president, has in recent years said Pakistan may drop that demand as part of a solution.

The activists said Nicholson met only pro-India Kashmiris during a visit to the region this year.

Ashraf Saraf, an official of the All-Parties Hurriyat Conference [APHC], an umbrella organisation of Kashmiri groups opposed to Indian rule in the region, said: “She did not meet pro-freedom groups, APHC leaders and common people.”

Referring to the resolutions calling for a referendum to determine whether Kashmiris wanted to be part of India or Pakistan, Saraf said: “She has tried to brush aside the right of self-determination which goes against the UN Security Council resolutions.”

Armed separatist groups have been fighting Indian security forces in Indian-administered Kashmir since 1989. India has long accused Pakistan of backing the groups.

The European report deplored human rights violations by Indian security forces in Indian-administered Kashmir as well as violence by the groups based in Pakistan.

Indian authorities say more than 41,000 people have been killed in the armed conflict. Independent rights groups say the toll is much higher and anti-India activists put it at 100,000. 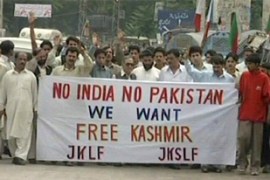 Advances have been made in “back channel” negotiations over Kashmir dispute.

Five people were killed and at least 50 wounded on Friday when a grenade was thrown at worshippers in a crowded mosque in Indian Kashmir, police said.