Witnesses described how a pair of vehicles were involved in what Nuri al-Maliki, the Iraqi prime minister, called “a horrible massacre”.

The first bomber lured labourers to his truck with the promise of work. When they gathered around it, it exploded. A second bomb exploded almost simultaneously.

Ali Hussein, an eyewitness, told Al Jazeera: “The accident happened between 7 and 7.30 this morning. There was a coach there and the driver was asking for labourers and he collected people who were innocent and in need of money – and thought the government would help them – and then he exploded the coach.”

“After the explosion, not a single person in the square was standing. I thought everyone was dead,” said Khaled Nasser, a labourer who searched the wreckage for four of his companions.

“I found them all cut in half, no legs, and for some I could only find their heads.”

Two buildings were severely damaged in the blasts and dozens of shops were burned, while plumbing fixtures and tools from vendors’ stalls lay scattered through the bloody debris.

“We are treating 25 people with extremely serious injuries,” a doctor from Ibn al-Nafis hospital said.

Afterwards, Iraq’s Sunni parliamentary speaker described the attackers as “outlaws and without a religion”, and called upon all armed groups to observe a truce for two months.

In a statement, Mahmud Mashhadani said: “This massacre shows that those terror groups are endeavouring to create chaos and killing, beside arousing sectarianism in the country.

“Security forces will track down those criminals and arrest them and take them to justice to get the punishment they deserve.”

Many Iraqis doubt, however, the security forces’ ability to halt the country’s rapid slide into lawlessness.

Baghdad is currently the scene of a cycle of revenge attacks between Sunni and Shia groups, with the use of car bombs increasing.

The UN estimates that more than 100 Iraqis are being killed across the country every day, many from sectarian-related attacks.

In other violence, an Iraqi cameraman working with Associated Press Television Network (APTN) was shot dead in the northern city of Mosul Tuesday.

“The AP has received word that an APTN cameraman in Mosul, Aswan Ahmed Lutfallah was killed today by gunfire in the city,” Robert Reid, an AP correspondent in Baghdad, said in a statement.

“Aswan leaves a wife and two children and worked for APTN in Mosul since 2005, we are stunned and saddened by this news.”

At least 127 journalists and media workers have been killed across Iraq since March 2003 according to the Committee to Protect Journalists.

Also on Tuesday, a bomb exploded at the golden-domed mosque in Samarra, the site of a February bomb attack that sparked nationwide civil strife. It caused minimal damage, the US military said.

Peter Chiarelli, America’s outgoing number two commander in Iraq, said on Tuesday that curbing unemployment and improving services would help to reduce the violence in the country and that military muscle cannot win the war alone.

He said: “We don’t have to drive unemployment down to 4 per cent like in the United States, that’s not what I am talking about. We don’t have to have 24 hours of electricity in Baghdad.

“But if we can increase the power in Baghdad back to 12 hours a day, it would be huge.”

With reduced unemployment and fewer power cuts, he said: “I think we will see things here change in ways that are hard to believe right now when you see the level of violence out there.” 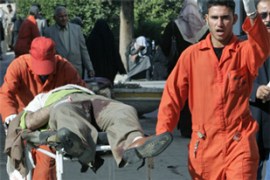 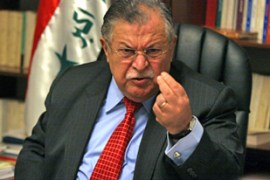