Mwai Kibaki, Kenya’s president, has taken a salary increase of nearly 200 per cent, which takes his pay to about $30,000 a month.

But the Kenyan government has said that his pay is in line with international standards.

More than half of Kenya’s population living on less than a dollar a day and analysts have said that it is difficult to justify a huge pay increase.

“Every Kenyan should condemn this move to increase his salary. The president and his cabinet do not deserve it,” one Kenyan attending independence day celebrations told Al Jazeera.

But another said: “I think Kibaki deserves the money because he has improved so many things in Kenya. Life is better from what it was during the old days.”

Many Kenyans believe that the money could have gone a long way to make life a little better for the average Kenyan.

Economists have estimated that the increase in salary alone is enough to send eight million of the country’s poorest children to school for a year.

Kenya might get a chance to have their say on the president’s pay rise next year when he is scheduled to stand for re-election. 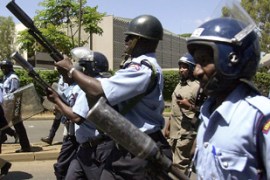