“Our reform process will continue with the same decisiveness,” said Erdogan, whose government has pushed through a heavy programme of political, social and economic reform in a bid to meet EU demands.

“Despite this government being ready to make every kind of concession in EU relations, we have reached this stage of deadlock…. Lots of talking has brought us to a quick divorce,” Baykal told his centre-left but nationalist-minded CHP.

EU debate over ‘punishing’ Turkey mirrors deeper-running differences within the bloc over the desirability of admitting a large, relatively poor and predominantly Muslim country. France and Austria, among others, view Turkey’s candidacy sceptically, while Britain backs membership as an important strategic move.

In encouraging news for Ankara, Olli Rehn, the EU enlargement commissioner, said on Tuesday the bloc was ready to open new negotiating chapters with Turkey soon.

“Turkey is ready to proceed as soon as possible … with the opening of chapters for which technical preparations have been completed,” Rehn told a news conference in Strasbourg, France.

Separately, EU sources said current EU president Finland hoped to restart talks before the end of the year, possibly on the economic and monetary affairs chapter.

On the Cyprus issue, Erdogan sounded a defiant note, saying Turkey would take no unilateral moves to resolve the row.

Last week, Turkey had raised the possibility of opening one port to Cypriot shipping for one year, on a unilateral basis. His latest remarks suggested that proposal no longer stood.

Turkey has no diplomatic relations with Cyprus, an EU member since 2004, and instead backs breakaway Turkish Cypriots in the north of the divided Mediterranean island.

Ankara says it will not open its ports to the Greek Cypriots until the EU lifts trade restrictions against the Turkish Cypriots, a move so far blocked by Cyprus.

Turkish financial markets ended narrowly mixed as investors digested the full impact of the EU decision amid a general sense of relief that the EU had not punished Ankara more.

Jose Manuel Barroso, the European Commission president, said the decision should be seen as a message of encouragement to reformers and democrats in Turkey, because the EU was pressing for progress on freedom of expression and human rights.

Turkey began EU entry talks 15 months ago but is not expected to join for many years, if ever. Polls show support for EU membership falling in Turkey.

European ministers aim to agree a slow-down in accession talks rather than a freeze. 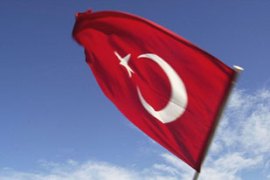