Shell’s Japanese partners, Mitsui and Mitsubishi, which own 25 and 20 per cent respectively, would sell 10 per cent each, the Financial Times said.

Sakhalin-2 was to be the largest privately funded energy project in the world, worth $20bn, and has caused friction between Russia and Shell.

Russia suspended all work on the project in September on the grounds of environmental concerns, but some foreign investors accuse Moscow of attempting to reassert control of its energy resources.

The Financial Times said those foreign investors decided to give into months of pressure from Russia, which included the threat to open criminal investigations over alleged environmental violations.

Japan is to be the main beneficiary of the project, given its own dearth of natural resources, and the two companies holding stakes in Sakhalin-2 said Shell was leading the negotiations.

A spokesman for Mitsui said: “As the negotiating right is held by Shell, we are just waiting for the outcome of the talks. We have not heard that an agreement was reached.”

A spokesman for Mitsubishi said: “Although we have been informed by Shell on the negotiation process, we are not in a position to give details about it.”

The Japanese newspaper Nihon Keizai Shimbun reported similar details of the potential stake sales, but said the proposal came from Alexei Miller, the head of Gazprom, and that Shell held off on an immediate response.

However, if Shell agreed to offload some of its stake, the Japanese firms would probably do the same, the paper said.

Japan has said that delays to Sakhalin-2 could hurt overall relations with Russia. The project was scheduled to begin shipping liquefied gas by as early as 2008. 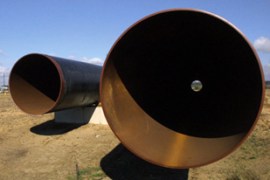