“Poverty must be treated as a matter of justice and human rights, that every country has a duty to address, regardless of its resources.”

“The holistic approach of development should be a human rights-based approach,” he said.

“The starting point should be access to work, access to education, and access to services. These are basic living conditions, the basic rights of the human being. ‘Human rights’ is not something that we are adding to that individual’s life, it is a basic requirement.”

Arbour’s statement for this year’s Human Rights Day was less controversial than in 2005. Arbour warned that the global ban on torture was becoming a casualty of the “war on terror”, singling out reported US practices of sending terrorist suspects to other countries and holding prisoners in secret detention.

Her comments provoked a rebuke from John Bolton, the US ambassador to the UN, who said it was “illegitimate for an international civil servant to second-guess the conduct … in the war on terror, with nothing more as evidence than what she reads in the newspapers”.

Human Rights Day is observed by the international community every year on 10 December.

It commemorates the day in 1948 the United Nations General Assembly adopted the Universal Declaration of Human Rights.

The Office of the United Nations High Commissioner for Human Rights (OHCHR) helps to protect and promote all human rights around the world.

OHCHR, headquartered in Geneva, works to enforce universal principles on human rights, through the promotion of both the universal ratification and implementation of human rights treaties and respect for the rule of law. 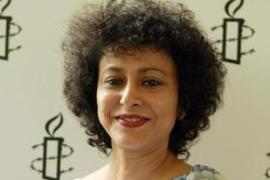