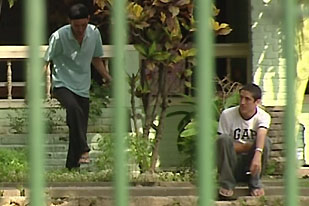 Seen as a holiday island by some, Lombok
has become a prison for Ali Hakim (right)

Pressure is mounting on Australia to grant asylum to almost 50 Afghans who have been stranded on the Indonesian island of Lombok for the past five years.

The Afghans were part of a group of about 200 who tried to reach Australia by boat in November 2001, but was stopped by the Australian navy and returned to Indonesia.

Ali Hakim was 13 years old when he left Afghanistan

He sold all of his possessions, including his deceased parents’ home, in order to pay a people smuggler $8,000 to get him to what he believed would be a better life in Australia.

There was, he had been told, a guarantee he would be resettled there. But after leaving Indonesia, bound for northern Australia, Ali’s journey came to an abrupt end.

The boat he was traveling on was intercepted by the Australian navy in the Arafura Sea and towed back to Indonesian waters. 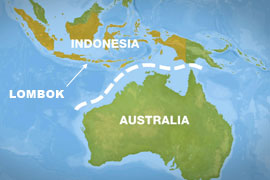 It was there they were told that the Australian government took no responsibility for them and that they must sail themselves back to dry land.

Since then, Ali has been stranded on Lombok.

Indonesia refuses to accept him as a refugee, leaving him and his fellow Afghans in limbo waiting for their asylum claims elsewhere to be processed.

For 5 years he has had no access to either employment or education.

He exists on less than $2 per day and has no freedom of movement beyond the island.

“Its not a life, everyday the same thing,” he says.

Its not a life, it’s an animal life

“In the morning just wake up, cooking by yourself, eat and sleep, do nothing. Its not a life, it’s an animal life.”

Ali says he can neither return home, nor go to Australia.

There are now 48 Afghans left on Lombok. They say they are at the mercy of the Australian and Indonesian governments, the UNHCR and the International Organisation for Migration.

Even though Ali and the other Afghani asylum seekers made their way to the Ashmore reef which is part of Australia, the area had been ‘excised’ one month prior to their arrival from the country’s migration zone.

That enabled Australia to process the refugees offshore, under a new scheme called the ‘Pacific Solution’.

Under this policy, a number of Pacific island nations were signed up to host offshore asylum processing camps – the most prominent of which was on the island of Nauru.

‘Out of sight, out of mind’ 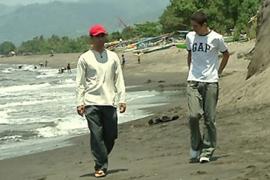 Indonesia refuses to accept Ali and
the other Afghans are refugees

Lombok, however, is not part of the ‘Pacific Solution’ and according to Andrew Bartlett, a senator from Australia’s opposition Democrats Party, it has become “the equivalent of a secret offshore detention centre.”

“It’s out of sight, out of mind. People might be able to move around a particular location, but there’s nowhere for them to go in terms of their future, there’s no way for them to build their lives and they’re completely at the mercy of the local authorities.”

The Australian government maintains that the refugees are not its responsibility because of the migration zone changes in September 2001.

However, according to Australian Department of Immigration figures given to Al Jazeera, the Australian government has been paying around US$2 million annually to the International Organisation for Migration (IOM) to provide care for the refugees.

Asked about the payments to the IOM, Amanda Vanstone, the Australian Immigration Minister, said: “We believe that we need to be a good international citizen. We are the second largest taker of people in need.”

The head of IOM’s office in Lombok, Yong Lai Kong, told Al Jazeera that he believed the payments were an acknowledgement of some responsibility by the Australian government.