This is the first time in two years that such protests have taken place on this scale at Iranian universities.
“A small number of people who claim there is oppression are creating oppression and do not let the majority hear [my] words,” he said.
According to the student news agency ISNA, Ahmadinejad responded to the students’ chants of “students can die but they do not accept degradation” by criticising the US.
“Today, the worst type of dictatorship in the world is the American dictatorship which has been clothed in human rights,” he said. “Our students are free and they fight and die but do not accept the foreigners’ missions or bend to them.”
‘Honour to burn’
“It is my honour to burn for the sake of the nation’s ideals and defend the system,” Ahmadinejad was quoted as telling protesters who set fire to his picture, according to ISNA.
“Americans must know that even if Ahmadinejad’s body is burnt a thousand times for this purpose, Ahmadinejad will not retreat even a centimetre from these ideals.”
The Iranian president’s speech was also interrupted by firecrackers, ISNA said.
A group of Amir Kabir’s top students had earlier expressed objections to the government’s economic and political agenda as well as confrontation with student activists and ridding universities of independent lecturers.

“Today, the worst type of dictatorship in the world is the American dictatorship which has been clothed in human rights”

“Bankrupting the country’s industry, inflation, distribution of poverty, defacement of the country’s international image and playing with the nation’s fate in diplomatic issues,” were among the points brought up in a statement.

“University is alive and criticises the government,” it added, according to ISNA.
The incident came after hundreds of Iranian students protested at Amir Kabir on Sunday to denounce a crackdown on a reformist-led university association, according to the ISNA news agency.
Between 2,000 and 3,000 students also demonstrated at Tehran University on Wednesday to mark students’ day, chanting slogans such as “for freedom and against despotism”, said ISNA.
Source: News Agencies 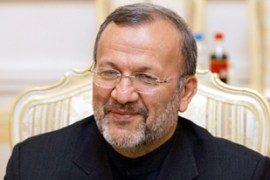 The Iranian foreign minister says Tehran could aid a US exit from Iraq.