He said he wanted the United Nations to respond “immediately and concretely” to the requests.

British Ambassador Emyr Jones Parry, who drafted the council statement, said after years of conflict and political fragility, “it’s astonishing that Nepal today, however difficult its problems are, actually faces a better future.”

“What we’ve mapped out today is a way in which the UN family, not just the Security Council, could rally behind the positive developments in Nepal,” Jones Parry told reporters.

The two sides last week signed the comprehensive peace accord declaring a formal end to a decade-old conflict in which more than 13,000 people have died.

Under the deal, both sides have agreed to let UN civilian personnel monitor the management of their armies and arms, which are to be locked away.

The UN is also offering to coordinate foreign financial support for planned elections and to provide technical assistance to the Nepalese Election Commission.

Meanwhile Human Rights Watch said on Friday that both sides should show their commitment to the peace agreement by providing accountability for human rights violations that took place during ten years of fighting.

The group said the army has still not provided information about more than 600 Nepalis who were taken into custody by troops and have not been seen since.

It also said the Maoists were notorious for severely punishing any Nepalis they deemed as insufficiently committed. 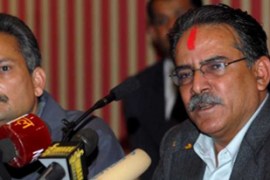