“We will act according to the law,” said Viktor Baloha, Yushchenko’s chief-of-staff.

Baloha said that Yushchenko could propose Tarasyuk again, as appointing the foreign minister falls under the president’s powers.

Following his dismissal, Tarasyuk told journalists that the constitutional court would have to give its verdict.

Tarasyuk “is a master of conflicts,” said Ivan Bondarchuk, a Yanukovych ally, before the vote. “He is a member of the Cabinet but he does not act like a member of this team.”

However, Vyacheslav Kyrylenko, a Yushchenko-allied deputy, accused the parliamentary majority of trying to force through “a full revision of the foreign policy course of our state.”

Yuriy Lutsenko, the interior minister, was also fired after a 248-22 vote. Another Socialist party member, Vasyl Tsushko, was named as his replacement.

Lutsenko, immensely popular, was one of the organisers of the 2004 Orange Revolution, and opinion polls show his popularity continues to climb.

Baloha said that Yushchenko’s office was pleased with the choice to replace Lutsenko with another Socialist.

Asked if Yanukovych’s majority was usurping power, Yanukovych insisted that they were working within the constitution. 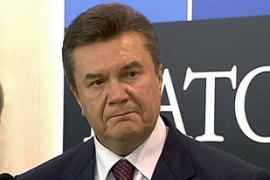 The Ukrainian parliament tries to dismiss ministers aligned with the president.