The tsunami destroyed more than 800km of Aceh’s coastline, left more than 168,000 people dead or missing in the province, wrecked livelihoods and flattened infrastructure and houses.

Aceh, the northern tip of the island of Sumatra, was the closest point on land to the epicentre of the earthquake which created the tidal wave.

Barbara Stocking, the director of Oxfam, said: “Aceh has made enormous strides towards recovering from the tsunami.

“But two years after the tsunami struck, the poorest Acehnese squatters, renters and women are still facing a crisis over when and where they will be resettled.

“The lack of a clear policy for landless people has led to a huge amount of uncertainty and delay. There’s a risk these people will end up in the slums of the future, despite the huge amounts generously given after the tsunami.”

Oxfam’s report found that a considerable amount of land is submerged and 15 percent of agricultural land, around 150,000 hectares, has been lost.

Most of the land titles were destroyed or made illegible and most people lost all their identification documents, the aid agency said.

Stocking said: “Rebuilding homes without knowing who owns the land could create problems in the future.

“But this can be a desperately difficult and slow process. Oxfam has been working with tens of villages in Aceh to help people decide how to reallocate land so everyone has somewhere to live.”

Oxfam demanded a commitment by the Indonesian government and non-governmental organisations to find long-term solutions to the barracks problem.

It called for better co-operation between the Indonesian government and non-governmental organisations in Aceh and said resettlement should be carried out and rental agreements restored.

Bill Clinton, the former US president, praised the wider rebuilding progress during a visit to the capital Banda Aceh on Saturday.

A peace agreement last year ended nearly three decades of conflict between separatists and the Indonesian military, leading to Monday’s first direct elections in Aceh to choose the heads of the province and its 21 districts. 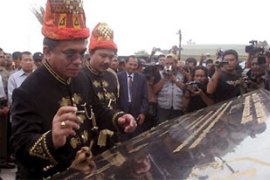