In a statement, the group also said the attack was in response to the arrest of 15 Palestinians, including Fatah members, by Israel in the West Bank on Monday.
One of the rockets exploded in an open field near the southern Israeli town of Sderot but caused no damage or casualties, an Israeli military spokeswoman said.
A second rocket backfired and landed in the Gaza Strip.
Palestinian armed groups had agreed to stop rocket attacks from Gaza in exchange for an end to Israeli military operations in the area.
David Chater, Al Jazeera’s Jerusalem correspondent, said: “This is a shaky ceasefire… it has to be extended to the West Bank otherwise you will see continued responses which will undermine the chance for peace.”
Security officers
Ehud Olmert, the Israeli prime minister, has said he hopes the truce can be extended to the West Bank.
In a speech on Monday, Olmert also offered a prisoner exchange in return for the soldier whose capture in a cross-border raid by Palestinian fighters was followed by a stepping-up of Israeli military actions in the Gaza Strip.
Thousands of Palestinian security officers took up positions across northern Gaza on Sunday in an attempt to prevent fighters from launching more raids on Israel.

Abdel Razek Mejaidie, the security adviser to Mahmoud Abbas, the Palestinian president, said: “The instructions are clear. Anyone violating the national agreement will be considered to be breaking the law.”

An official said 13,000 Palestinian security officials were on the ground in Gaza to prevent rocket attacks being launched. 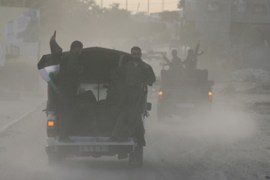