Musharraf’s remarks provide an idea of what direction a resolution to the conflict could go.

The countries have fought two wars over Kashmir, and New Delhi accuses Islamabad of supporting armed conflicts in India‘s two-thirds of the region that has killed 68,000 people since 1989.

Pakistan says it only gives the separatists diplomatic and moral support, not material aid or training.

On Tuesday, two Pakistani fighters died in a gun battle with security forces in Sopore town, in the Indian-administered portion of Kashmir.

A police spokesman said the fighter belonged to the pro-Pakistan al-Badr group, one of a number of groups operating in Kashmir.

Also on Tuesday one person was killed and around 15 thought to be injured after a hand grenade exploded in a market in the Kashmiri town of Baramulla.

Police said the injured civilians were waiting at a bus stop when the grenade went off in the hands of a man identified as twenty-five year old Munir Ahmed.

Viplav Kumar, the local chief of police, said that “the militant later died in hospital”, but Munir’s relatives denied he was a militant and said he had been at the market buying groceries.

Despite outbreaks of violence, tensions in Kashmir have eased considerably since India and Pakistan began a peace process in 2004.

Musharraf told the independent New Delhi Television that Pakistan would agree to greater autonomy or self-governance for Kashmir with New Delhi and Islamabad jointly supervising the region. Both India and Pakistan claim all of predominantly Muslim Kashmir.

When asked if Pakistan was ready to give up its claim, he said: “We will have to … if this solution comes up.”

First, Musharraf wants India and Pakistan to focus on the parts of Kashmir that are genuinely disputed by both sides, according to details of a phased plan he has discussed in the past.

For example, Pakistan might give up any claim to the Hindu Jammu region and the Buddhist region of Ladakh, if India renounced its claim to the Muslim areas of Gilgit and Baltistan ruled by Pakistan.

That would leave a majority Muslim region centred on the Kashmir Valley, most of which is now under Indian control but a part of which is ruled by Pakistan.

The two sides would then soften the border dividing Kashmir until it became “irrelevant”, so that people and goods could move freely. A phased demilitarisation would follow.

Autonomy or self-governance would then be offered to the Kashmiris, under the joint supervision of the two countries.

The proposals are not new, but Musharraf has expressed frustration at what he sees as a lack of response from the Indian government.

The televised interview was seen as a direct appeal to the Indian people by sections of the establishment in New Delhi.

New Delhi agrees with the idea of creating a soft border and granting some autonomy, but has been wary of other aspects of Musharraf’s plan, particularly joint control.

“This is a serious matter and cannot be discussed before the media,” said Anand Sharma, India’s junior foreign minister.

Foreign ministers of the two countries will hold talks next month and could discuss the proposals, he said. 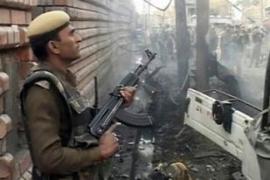 Pakistan and India in security deal

India and Pakistan have agreed to restart peace talks following a meeting between the leaders of the two nations at the Non-Aligned Movement summit in Cuba.

A leading human rights group has condemned both sides in the ongoing Kashmir conflict for widespread rights abuses and says the battle is increasingly being influenced by religious radicals.