Al Jazeera Correspondent Dan Nolan, who is in Suva, says the heavily-armed troops manning roadblocks have been checking cars leaving the city, apparently looking for government ministers or for Qarase himself.

Commodore Frank Bainimarama, Fiji’s military chief, has threatened to launch a “clean up” of Qarase’s government saying it is corrupt and soft on the leaders of the country’s last coup in 2000.

A military takeover would be Fiji’s fourth coup in 20 years.

In a statement to reporters late on Monday, Bainimarama said he had ordered weapons taken from the police to ensure they were not used against the military.

He said the police still had a role in maintaining security and would work together with the military to ensure “the security and safety of all the people of Fiji’.’

Asked who was running the country, Bainimarama said: “I don’t have any comments right now.”

Earlier Moses Driver, the acting police commissioner, condemned the military’s seizure of police weapons, but said he had no indication the disarmament was a prelude to a coup.

“Until now I have not concluded a coup d’etat is in place,” Driver said.

One of the military’s key demands has been the disbanding of the police tactical unit – the only part of the Fijian police force allowed to carry weapons.

On Friday Bainimarama said the prime minister had missed a deadline to agree to a series of military demands, adding that he took that as a green light to go ahead with a “clean up” of the government.

Bainimarama has said any takeover would be peaceful, but has warned neighbouring countries – particularly Australia and New Zealand – to stay out of Fiji’s internal affairs. 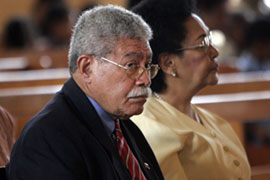 In Canberra on Monday, Alexander Downer, the Australian foreign minister, warned that Fiji stood on the brink of a coup but said he believed there was a split in the ranks over whether to actually go ahead and remove the government.

“There isn’t an inclination to mutiny against the commander, so it’s a torturously complicated situation.” ‘Treason’

Qarase has said the threatened overthrow of his government amounts to treason.

“What he’s saying he’ll execute, that will be totally illegal,” Qarase told Fiji radio over the weekend.

“It will be against the constitution of Fiji, against the laws of Fiji and will amount to treason.” 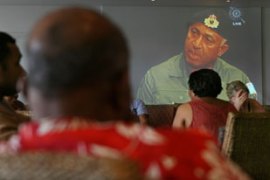 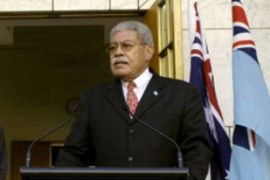