The transfer was ordered by Alvaro Uribe, the Colombian president, who is facing a political crisis over the arrest of three politicians accused of being involved with the paramilitaries.

The paramilitaries committed some of the worst atrocities of Colombia’s four-decade-old conflict, in which thousands are killed each year

They were formed in the 1980s to help landowners defend their property and collaborated with government forces to fight Marxist rebels.

Uribe’s government has accused them of continuing their criminal activities from inside the work farm.

On Thursday, the president said they should be investigated for the November killing of two fellow paramilitaries, which officials say may have been ordered to keep them from providing information to investigators.

Uribe threatened to extradite those responsible for the deaths to the US on cocaine charges.

“If the intelligence services confirm that these two killings were ordered by people in La Ceja, it appears that Uribe’s threat of extradition is real,” Ricardo Avila, a political commentator, said.

The paramilitary leaders have complained that their transfer breaks the deal signed with government which lead to them giving up arms and denied they were planning to escape.

“We are being take to prison like we are a band of criminals that had been captured,” Freddy “The German” Rendon, a paramilitary commander, said from the La Ceja work farm by cellphone.

“We are in peace negotiations. We were not defeated in battle. The government is not sticking with its side of the deal.”

Their transfer is likely be welcomed by the UN and foreign governments, who have accused the government of being too soft on the paramilitaries in the face of mounting evidence they have been flouting the terms of their 2002 peace deal. 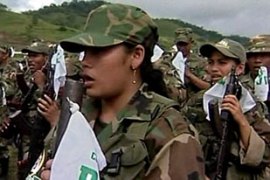 Paramilitaries call on their collaborators to confess to their role in the civil war.