Police say around 80,000 protestors turned up for the demonstrations, while organisers say the figure is around 800,000.

Demonstrators blocked all roads leading to Siniora’s offices, which have been barricaded by armed Lebanese troops in armoured vehicles.

Organisers said the protesters put up tents on main roads leading to the Grand Serail building to force the resignation of Siniora, who was inside his offices with a group of cabinet ministers.

“These are not Hezbollah supporters, they are Lebanese from every sect,” Al Jazeera’s Rula Amin said.

The call for peaceful street action came after a statements by Hassan Nasrallah, leader of Hezbollah, and other leaders.

“We appeal to all Lebanese, from every region and political movement, to take part in a peaceful and civilised demonstration on Friday to rid us of an incapable government that has failed in its mission,” he said.

The Lebanese military has instructions to maintain order and not take sides during the protest and open-ended sit-in.

Tents, food, medical supplies and electrical generators are being distributed for what is expected to be a lengthy display of dissatisfaction.

“The resistance [Hezbollah] is not going to shoot Lebanese people, and there will not be a civil war.”

As well as the Hezbollah, the opposition factions include the Shia Muslim Amal party of parliament speaker Nabih Berri, the Christian faction of Michel Aoun, a former prime minister, and supporters of the Syrian-backed president.

They had urged the demonstrators to only carry Lebanese flags rather than those of the political factions.

Emile Lahoud, the Lebanese president, told UK’s Daily Telegraph newspaper that he was confident that the protests would not be the beginning of violent confrontations between supporters of the various political factions.

“The resistance [Hezbollah] is not going to shoot Lebanese people, and there will not be a civil war.”

He also criticised the government as “no longer legal” because it does not adequately represent the country’s religious make-up after the resignation of five Shia ministers.

There has been weeks of political tension between anti-Syrian groups and Syrian supporters over proposals for the formation of a unity government.

Meanwhile, the prime minister has appealed to the Lebanese to rally behind his government.

“The government of the independence … will continue to defend freedom and the democratic regime which are being targeted,” Fouad Siniora said.

“We will not allow any coup against our democratic regime. We are determined to stay the course, as our government is legitimate and constitutional … and enjoys the confidence of parliament.”

Walid Jumblatt, the leader of the Lebanese Druze and a prominent anti-Syrian MP, denounced the protest and called for his supporters to stay calm.

“This is an attempted coup but we will remain strong,” he said.

“We will stay home, we will hang the Lebanese flags … and when they will decide to return to dialogue, we will welcome that.”

Last year massive street protests after the assassination of Rafiq al-Hariri, former prime minister and critic of Damascus, led to Syria withdrawing its troops from Lebanon. 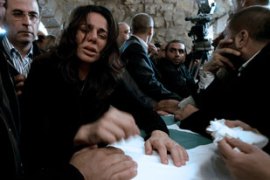 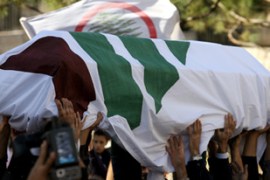 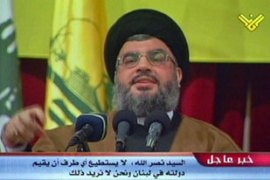 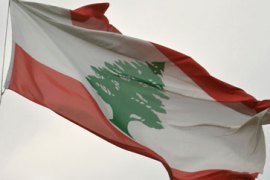