Gothabaya Rajapakse, who was appointed by his brother last year, has taken a hard line against the Tamil Tigers.

The suicide bomber apparently came on a scooter rickshaw from the opposite direction and targeted the convoy, Jayantha Wickremeratne, Deputy Inspector General of Police, said.

Rajapakse was inside a bulletproof car which was flanked by two motorcycle escorts.

The president’s office said Gothabaya had gone straight to see his brother after the attack.

“After the explosion, he directly came to the president’s office and hugged him,” Sudath Silva, President Rajapakse’s official photographer, said. “The blood on his clothes was that of his security guards.”

The attack comes just days after the Liberation Tigers of Tamil Eelam (LTTE) said that they had no option but to fight for an independent homeland for the Tamil minority in the north and east of Sri Lanka as the peace process was defunct.

Police cordoned off the blast site and launched a search operation for an accomplice who may have helped carry out the attack.

“We have asked police to check all vehicles leaving the city to try and track down the suspect,” an official said.

More than two decades of separatist violence has killed more than 67,000 civilians, troops and Tamil fighters, about 3,000 of those this year. 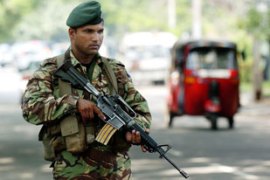 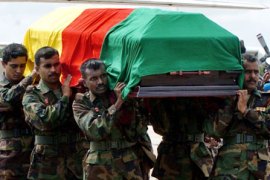