An enormous gold and red cloth representing the Silk Road stretched through the stadium followed by six giant ornate caravans,  representing the regions of Asia, and their colourful, dancing troupes.

Celebrating the skills of the desert region’s horsemen, 64 riders in white tribal dress and carrying penants performed a detailed routine on Arabian horseback, to roars of aproval from the  crowd.

Qatari emir Sheikh Hamad bin Khalifa Al-Thani opened the 15th and largest ever Games with thousands of athletes from 45 countries to compete in 39 sports.

“The United Nations has emphasised the importance of sport in  achieving peace..,” his son, Crown Prince Tamim bin Hamad Al-Thani,  told the crowd, saying this was an important aim of the Games.

As they looked on, Bollywood singer Sunidhi Chauhan sang of harmony and unity, before 1,900 Qatari school children ran into the  stadium carrying illuminated doves to form the words peace in Arabic  and English.

The field was again transformed, this time into a giant “Arabian  majlis” or reception room with enormous cushions and Arabian coffee pots, to welcome the athletes as Cantopop king Jacky Cheung sang Together Now.

Huge cheers greeted into the arena the Iraqi team who are entering these Games for the first time in 20 years despite uncertainty in their war-ravaged country.

The Palestinian territories and Lebanon were also warmly received along with athletes from Afghanistan, suffering their worst 12 months of bloodshed since the fall of the Taliban.

However, the biggest reception was reserved for hosts Qatar who  marched in to a standing ovation.

Over 10,500 athletes and officials are taking part in the Games. It is the second-biggest multi discipline event after the summer Olympics. 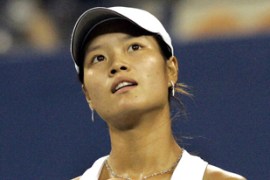