The authority in charge of the city’s airport said they were considering diverting all incoming flights to Hong Kong. 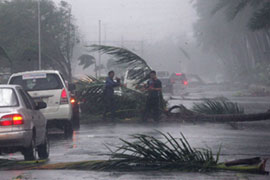 Durian is the fourth typhoon to strike the Philippines in three months and appears to be following a similar path to September’s Typhoon Xangsane.

That storm left around 200 people dead and missing with clean-up work still far from finished.

Damage to transport links and crops has already had a noticeable impact on the country’s third quarter economic figures.

Rescue officials have warned of the danger of flash floods, mudslides and powerful storm surges.