The Blue Mosque is the best known mosque in Turkey and a popular tourist attraction. It got its popular name from the fine blue Iznik tiles in the main prayer room.

Pope John Paul II, Benedict’s predecessor, made the first papal visit to a mosque during a trip to Damascus in 2001.

About 150 nationalists maintained their demonstrations against the pope’s visit, saying that the Aya Sofya, which is now a museum, should be re-opened to Muslim worship.

The German-born Pope has already defused much of the tension linked to his visit, his first to a mostly Muslim country, by supporting Ankara‘s bid to join the European Union and praising Islam as a religion of peace.

When he was a cardinal he spoke out against Turkey joining the EU because of its Muslim roots.

The main thrust of his visit was Christian unity.

In a joint statement, the pope and Ecumenical Patriarch Bartholomew I, the spiritual leader of the world’s Christian Orthodox, stressed the need to “preserve Christian roots” in European culture while remaining “open to other religions and their cultural contributions”.

They also signed a common declaration that appeared to jointly support Turkish membership if it protected religious liberties. 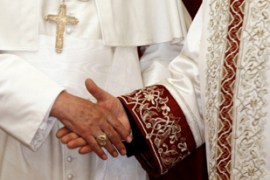 Turks make peace with the Pope 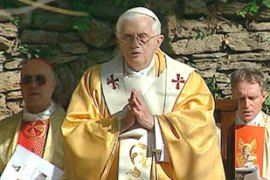 Benedict XVI arrives in Istanbul pursuing a key goal of his papacy.

The pope visits one of Turkey’s holiest Christian sites amid tight security. 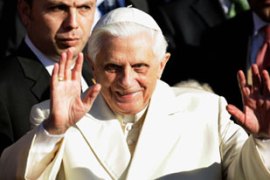