The programme entails military and political cooperation with existing Nato members, including joint military exercises and regular meetings with allied armies.
Three Balkan countries – Croatia, Macedonia and Albania – already take part in the programme and are expected to win full Nato membership at a later date.
The move to invite Serbia – strongly backed by Poland and other post-communist member states – appeared designed to defuse the growing appeal of nationalist hardliners as the country prepares for parliamentary elections in January.
Nato said in a statement: “We strongly support the ongoing reform processes and want to encourage further positive developments in the region on its path towards Euro-Atlantic integration.”
Decision criticised
Carla Del Ponte, the chief UN war crimes prosecutor for former Yugoslavia, said through her spokesman that she was “surprised and disappointed” by the decision to invite Serbia and Bosnia-Herzegovina into the partnership.
“The prosecutor is highly surprised because she was not consulted,” Anton Nikiforov told Serbia’s B92 radio.
“She is disappointed because it turns out that Serbia was rewarded for its non-cooperation with the [UN war crimes] tribunal.”
Boris Tadic, the Serbian president, said the invitation was “great news” and would benefit the country’s economic recovery and pave the way for a military overhaul.
Vuk Draskovic, Serbia’s foreign minister, said participation in the programme would also help Serbia re-open suspended pre-membership talks with the European Union.
“This is a message to all retrograde forces in Serbia that there will be no return to the past.”
Nato launched a 78-day aerial bombing campaign against Serbia in 1999 to force then-Yugoslav leader Slobodan Milosevic to withdraw his troops from Serbia’s mainly ethnic Albanian province of Kosovo.
Nato still has about 17,000 troops in the province, which has been run as a virtual UN protectorate since the war ended.
Source: Al Jazeera, News Agencies 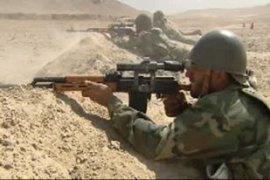 Nato leaders use second day of Riga summit to discuss the creation of a rapid response force.

The chief prosecutor of the Yugoslav war crimes tribunal has said that suspects in Balkan war atrocities could escape justice if her court does not receive more support.

US and Serbian armies to co-operate

The US has signed a military cooperation pact with Serbia despite strains over Belgrade’s failure to help bring accused Bosnian Serb war criminals to trial.