Lobato also resigned in June to take responsibility, he said, for the riots sparked by the sacking of more than a third of the military.
He was arrested three weeks later.
During closed court hearings in June and July Lobato twice admitted that he armed civilian Timorese so they could murder enemies of the ruling Fretilin party, court monitors have revealed.
But days later he claimed he was coerced by Australian soldiers into making false declarations in court – charges denied by officials in Canberra.
Security fears
Thursday’s hearing was to have been held in the East Timor High Court, near the headquarters of Australian peacekeepers, instead of the Dili District Court for security reasons, said George Barbosa da Silva, a court official.
Vincente “Railos” da Concecao, the self-proclaimed leader of the hit squad, said he would attend as a witness.
East Timor has been plagued by instability since rival security forces clashed in the capital, Dili, in April and May after Alkatiri’s government sacked 600 soldiers.
The arrival of more than 2,500 foreign peacekeepers and the installation of a new government brought some respite, but there have been isolated cases of gang warfare, looting and arson attacks in recent months.
Alkatiri has been questioned several times about the hit squad allegations but he has denied the charges.
It is unclear if he will run in general elections scheduled for May 7.
Source: News Agencies 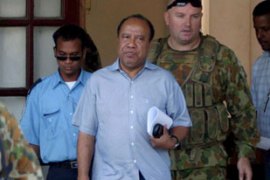 Former interior minister claims he was acting on orders of then prime minister.

East Timor’s main airport in Dili, the capital city, has been closed after violent clashes between groups of youths in which at least two people were killed, according to officials and residents.

A United Nations report has recommended Mari Alkatiri, East Timor’s former prime minister, face a criminal investigation over violence in the country year that led to the deaths of dozens of people and 150,000 fleeing their homes.