Rescue teams have been activated and severe weather alerts have been broadcast across Luzon, the most populated island, warning of the danger of flooding and landslides.
Some villages ravaged by earlier storms have still not had electricity restored, but officials are already preparing for Durian’s arrival with emergency response crews working around the clock.

Meanwhile the coast guard has barred ferries in the area from leaving port.

In late September, Typhoon Xangsane slammed into Manila, leaving 230 people dead and missing in the capital and surrounding areas.
The Philippines was hit by typhoons Cimaron and Chebi in late October and early November, leaving behind death and massive property damage caused by flash floods and mudslides.
In 2004, the Philippines was hit by a series of storms which left about 1,800 people dead or missing including 480 killed by mudslides in the eastern province of Quezon.
Source : News Agencies 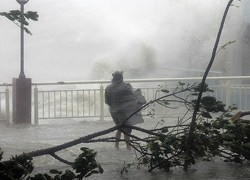 Flooding and landslides triggered by Typhoon Xangsane have raised the toll to more than 150 in the past week from the storm that hit Vietnam and the Philippines.

A typhoon has ripped off roofs, felled trees and cut power lines on Vietnam’s central coast, killing at least seven people before weakening overland and moving into neighbouring Laos.