Other items on the list are cigarettes, works of art, Harley Davidson motorbikes and even jet skis.

The list of sanctions specifically aimed at the Kim Jong-il government is part of the US response to North Korea’s nuclear weapon test on October 9.

After the test, the United Nations voted to impose a range of sanctions on trade with the North, including a ban on the sale of luxury goods. 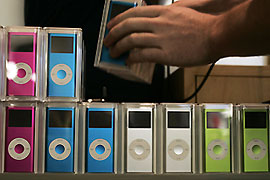 Kim is thought to hand out luxury gifts to
loyal officials [Picture: GALLO/GETTY]

However, the UN vote left it up to individual countries to define what specifically came under the luxury banner.

All of the goods on the US list are items said to be favoured by Kim and his senior officials, but are well beyond the reach of most North Koreans, many of whom go short of food every day.

However, officials acknowledge that because of the widespread black market trade in luxury goods, enforcing an international ban on their export to North Korea will be next to impossible.

“If you take away one of the tools of his control, perhaps you weaken the cohesion of his leadership,” Robert J Einhorn, a former senior state department official who visited North Korea in 1999, told the Associated Press.

North Korea has told South Korea that if it joins US-led sanctions against Pyongyang it will take action.

North Korea has rejected the financial and weapons sanctions imposed on it by the UN Security Council in response to its nuclear test.