The Islamic courts seized Bandiradley earlier this month from a local militia allied to Somalia’s transitional government. The government, though backed by Ethiopia, is largely powerless.

The move took the Islamic courts to within 100km of the semi-autonomous region of Puntland, where the authorities have vowed to resist their advance.

Puntland has ties with Ethiopia, and when Bandiradley fell on November 12, residents of the region’s main town, Galkayo, reported large movements of Puntland troops accompanied by Ethiopian military convoys.

The protests in Mogadishu took place on the eve of a planned United Nations Security Council meeting which is expected to discuss a resolution on the deployment of peacekeepers to Somalia.

Sheikh Yusuf Mohamed Siyad Indhaade, the national security chairman for the Islamic courts, said: “Our door of jihad is open for all Muslims around the world if the Security Council approves the deployment of foreign troops in Somalia.
“We call on the world to avoid a war that will affect the Horn of Africa.”

Sheikh Fu’ad Mohammed Khalaf, the head of the Islamic courts’ education department, said: “When the first shot is fired, all schools and universities will be closed and students and teachers will go to jihad.”

Experts say Somalia could become a proxy battleground for Ethiopia and Eritrea, which broke away from Ethiopia in a 1961-91 civil war and then fought another 1998-2000 border war with its rival. 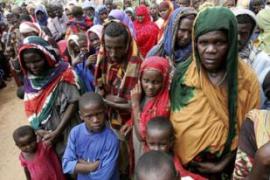