“You have to deal with all the people in Southern Thailand.

General Boonrawd said he doubted older groups such as Bersatu held any operational control over forces on the ground. Wan Kadir disagreed.

Thai Separatist demands as outlined in the confidential Peace and Development Plan for southern Thailand:

A Malay leader to head the provincial government.
Malay language to be taught in schools and as working language in government offices.
Education system to be at par with the rest of the kingdom.
Invest in economic development, infrastructure and bring back investors.
Curtail overzealous police enforcement and mass arrests.
Removal of the blacklist of individuals to be killed by extra-judicial means.
Improve police investigation methods instead of using racial stereotyping.
Reactivate the Southern Borders Provincial Administrative Centre.
At least 50% of government jobs to be given to locals.
Those coming to work in the South must understand and respect local religious customs and traditions.
Amnesty for all groups fighting the government at present.

He said: “If they say Bersatu has no power, fine. That is why they [the Thai government] cannot solve the problem and this is the main reason why the problem is spreading and will continue to spread.”

The main fear according to groups such as Bersatu is that the Thai government appears to be using tactics similar to those employed by General Prem Tinsulanond, a former prime minister and the present chairman of the privy council, in 1982.

On taking over as prime minister, General Prem carried out a rebuilding campaign in the south to win over villagers. He developed infrastructure, setting up the southern border provincial administrative centre, and provided economic development.

The plan was effective and most separatist groups went into exile as they lost popular support. Most groups became dormant and their leaders were forgotten.

However, under the administration of Thaksin Shinawatra, the recently overthrown prime minister, inequity and rough justice began to surface. The situation got so bad that people in the south turned again to the separatist leaders. Now these groups are entrenched in the south.

Now, leaders such as Wan Kadir say they are wise to the government’s tactics and say it will not be so easy to remove the groups as the people have lost faith in the government.

He said: “This time round, if you don’t deal with the real groups, then you are not going to solve the problem as we are an important part of solving it now.”

Wan Kadir says the Thai government should negotiate as the first phase for a lasting peace.

He said that the Thai military was involved in peace talks on Langkawi Island mediated by Mahathir Mohamand, the former Malaysian prime minister and Dato Shazryl Eskay Abdullah, the honorary Thai consul.

He said that the talks formed the foundation of the Peace and Development Plan for Southern Thailand, which the Thai government handed over to Mahathir’s perdana leadership foundation in June this year and which the various armed groups signed.

However, there has been no communication since the plan was submitted to Bangkok in August this year.

The Thai government has begun implementing most of the demands including plans announced yesterday for an economic zone in the south. But the government has yet to provide amnesty to the various warring groups and set up a date and venue for the next round of talks.

Wan Kadir said he and the various other groups under Bersatu were keen to continue discussions with the Thai government at these talks but that the ball was now in the government’s court.

“This disagreement is very important. You have to make us feel the same as other people, make us feel we are real like other Thai people. Instead you kill us every day. Is this how you treat us well?”

However, Wan Kadir admitted that there were still differences even within Bersatu itself and that resolving these problems would take time and patience.

He dismissed claims that he was no longer head of Bersatu.

“If not me, then who is president?” he asked.

“I want to resign, but no one wants to take my place. Still no one and they all come to me, call me and ask me about this and that. It still is me.”

He also noted that many from outside the region were not aware of what was going on at present.

He said: “Those who are not here may not know what is happening. The vice president of PULO Razi was at the Langkawi peace talks along with me as Bersatu. I do not want to comment on another group as it will cause further problems inside these groups.”

Wan Kadir said that, at present, peace was a long way off.

“I cannot say there will be peace in Southern Thailand. There are several factors. Peace is not easy. The new government have to handle it very carefully. They cannot just do certain things and expect peace to be developed.” 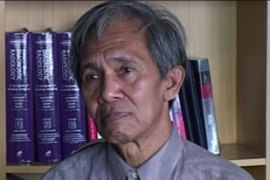